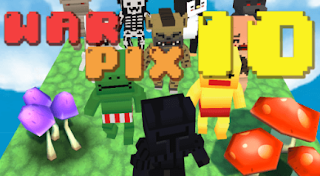 WarPix .IO is a modern 3D IO-style game. Create your own unique persona, choose a suitable weapon, and compete in the arena against players from all over the world.

Control:
—To switch, use the WASD or arrow keys.
—To strike, use the left mouse button.
Features:
—Customize the character's look, from the head to the arms model
—Battle other players on a large map
—Level up system to gain additional benefits
—Map and 3D blocky character templates
—More items are available for purchase in the store.
Strategy:
- In the arena, red and blue mushrooms regularly revive.
- Red mushrooms resurrect the player's HP (+15HP).
- Blue mushrooms grant knowledge (the limit is +2XP).
- You can also gain experience by killing the opponents in the arena.
- You can advance one of three random attributes after reaching a new stage, for a total of 8:
+ATK - Increases the cumulative Atk of the character (Add Atack +2).
+DEF - Increases the overall defense of the character (Add Defend +2).
+DMG SPREAD - Increase the spread of damage (Spread +1 Attack -1).
+HP - Increases the overall HP of the character (add +5 max HP).
+HP LEECH - Increase leech health by 2.5 percent of damage.
+SPD - Increases the cumulative Spd of the character (Move Speed +5).
- Gain Exp cost x1.5 - EXP x1.5 (For blue mushrooms)
- HP Recovery x1.5 - HP recovery rate multiplied by 1.5 (For red mushrooms)
Warpix.io is a massive multiplayer game with stunning 3D visuals and basic yet enjoyable action gameplay. In this game, you must reach the arena and compete against players from all over the world. You can build your own character and modify its look before entering the arena. After you've built your character, you'll be able to reach the arena and begin battle! You are armed with a massive hammer, which you must swing in order to inflict death and destruction on your foes. Look for plants on the ground and pick them up to obtain experience and cure yourself if you are wounded. Will you demonstrate your military prowess and beat your adversaries?
Related Games