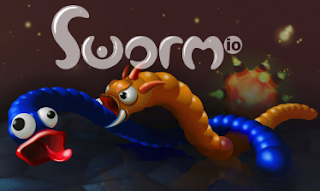 Sworm.io is a futuristic Slither-like IO game with advanced graphics and a number of exclusive features. You will zoom in and out of the view. By selecting "Spectate" mode, you will observe other players while they play Sworm.io. You will sever the worms of other players (or your own). On the website, there is a global Top-1000 ranking of the best Sworm.io game. The icing on the cake: you should get a swarm of worms instead of just one!

Control:
—Switch the mouse to monitor the worm's movement
—Left click or W to increase the worm's speed
—Right click or space bar to cut
Features:
—Excellent Snake-io game with HD graphics You can cut other worms or block their way
—Eat bugs to win shields for your worm
—Pick up power-ups
—Controllable zoom level
—Mini-map to see where other players are
—Spectate mode to watch other players play
— Skin that can be changed
The basic gameplay remains the same: you begin as a small worm and must eat the different minerals dispersed on the ground in order to increase in size and power. Aside from the normal minerals, you can also find power-ups that increase your survivability and attack power.
You must work hard to expand your worm while avoiding damage from other players – if you are cut by another player, you will lose a huge portion of your worm and will have to start again. Using the left-click button to give your worm a speed boost, which you can use to escape from other players or jump in for the kill! Will you defeat the Sworm arena?
How to play:
1. Use the cursor to guide your worms. You will handle several worms in Sworm.io!
2. To toggle Speed Boost, hold down the left mouse button or the “W” key.
3. To cut other worms, hold down the right mouse button or the “Space” click (or your own).
4. To zoom in and out, use the mouse wheel. If the worm increases in size, the view gap will naturally increase.
5. After the game, you will get a personal achievement URL for your results; don't forget to share it with your mates. The achievement URL is safe from tampering!
Strategy:
1. Eat food to gain weight.
2. Avoid colliding with other players' worms or the worms will die.
3. Eat bugs to gain shield benefits for your worms. Nobody can sever an armoured worm!
4. Choose the magnet bonus to temporarily increase the consume distance. Choose worm bonus to add a newbie worm to the worm swarm.
5. If other worms aren't armored, cut them! Divide and conquer!
Related Games