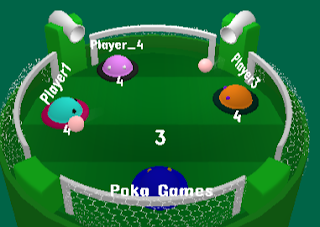 Soccer.io is an online multiplayer soccer match game. Quickly defend your goal! To get taller, knock balls into other players' goals! To win, you must be the last player on the map! How many players can you eliminate?

Control: To switch, drag the left mouse.
Features:
—Enjoyable goal-keeping action
—Four teams per match
—Slime characters
—Fullscreen mode is available.
Soccer.io is a fun online soccer game in which you must compete against three other players in a four-on-four match. You must score goals against your opponents in order to attempt to exclude them from the game. The number above the player's head reflects the number of times they will be scored on before being eliminated. Make an effort to defend your target and save as many shots as possible. Will you reign as the soccer champion on the field?
Related Games