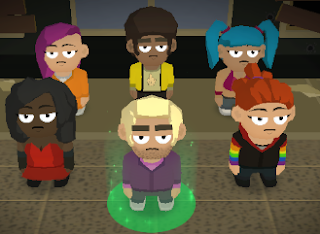 Bullet Town is a 2D shooter io game in which you play to become Mayor of this town. Blast your rivals and amass the cash you need to become Mayor! Join an all-out online gunfight for money and renown. In an exciting online multiplayer battle to raise $3000 and become Mayor, shoot up everything in sight and fend off the people of Bullet Town! Players struggle to bring a money bag back to their vault while escaping the barrage of gunfire from their enemies in this new twist on capture-the-flag type games featuring several arenas to play in. Bullet Town is a lot of fun, with a variety of weapon styles, fast rounds, and plenty of action!

Control:
—WASD to move
—Left mouse button to fire
—Right mouse button or E key to pick up an object
—R key to reload
Features:
—Eight different characters to pick from
—Different guns to use in town, including a lethal bazooka
—Shooting and money-collecting games
—Money bag drop
—Fullscreen play
—Cool announcer voice after the round finishes
—Destroyable items
—Unlimited ammunition
—Play with mates
Do you aspire to be the mayor of Bullet Town? You can now try in this entertaining and thrilling first-person shooter game. To become mayor, you must have the most money at the end of the round.
Move around the town and try to collect guns and objects, and use them to defeat the other players. You can also use an epic bazooka that does massive splash damage. Check out how you'll do in Bullet Town today!
Related Games