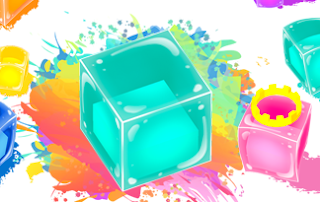 Slimes.io is a traditional territory io game in which you must rub all of the slime everywhere in order to win. Enter the arena of jelly slimes and use your color to paint the map! In 90 seconds, show them who is the biggest in the paint fight!

Control: The mouse is used to control your jelly slime cube. Color when moving, splash some, and level up to color more! To win, you must paint more than anyone else in 90 seconds!
Strategy: Splash others to grow larger and begin painting more as you level up. To take your spot on the leaderboard, chase down the top scorers and paint their color.
Features:
—A fun.io game of territory capture gameplay
—There are some slime shades to pick from
—a match has a time limit of 90 seconds
— After the match, there was a beautiful paint result.
Slimes.io is an online game in which you race against other players by splashing the slime everywhere in an attempt to conquer the play area. The sum of their color slime that has filled the white region determines the winner of the game; slide around the map to begin painting your slime.
As you continue to cover more ground with your slime, you will receive improvements that will allow you to cover more ground faster and more efficiently. Bully smaller players and cover more ground as you rise in height. There is a time limit of 90 seconds to cover as much ground as possible and emerge as the victor. Have a good time!
Related Games