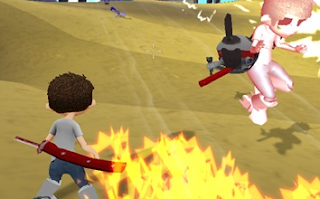 SideArms.io is an arena game played in third person. SideArms is a multiplayer third-person shooter set in a futuristic universe. Fast-paced death matches are held in low-gravity arenas riddled with various obstacles and scenery. As a rocket-powered android, your aim is to compete against other androids for the right to pilot a massive mech in a wild one-versus-all shootout.

Control:
— WASD to move
— SPACEBAR to jump
— Shift to activate rocket boots
— LMB to fire the gun
— RMB to shoot
— F to use the sword
— R to reload
— E to move arms
— ~ key to drop firearms
—  Number Keys (1 - 0) to use sticker emotes
How to Play:
In-Game Store
You can purchase guns from the shop between rounds and deaths. Some modes will pay you a stipend for each death, but the best ways to win money are to defeat other androids, go on kill streaks, avoid other players' streaks, and even collect the odd delivery rocket drop.
O.N.I. Battle
Battle it out on the ground to update the android as much as possible. Destroy pink delivery rockets to gain access to upgrade chips, weapons, and other useful objects. Other androids, in addition to transport missiles, can be a decent source of enhancements. When upgraded androids are eliminated, some of their chips will be lost.
When the fight starts, the android with the most improvements can win the right to battle their fellow androids with a massive O.N.I. mech. As an android, the mission is to work together with the other androids to deplete the O.N.I.'s resources before time runs out. Your target as the O.N.I. is to maintain your energy while removing as many androids as possible.
Team Combat
Earn points by destroying the other team's androids. Both goals are not equivalent, though - improved androids and players with bounties are worth bonus points! The round is won by the team with the most points at the conclusion of the round. After the contest, both players vote on the round's MVP!
Communication is important.
For in-game contact, SideArms employs a sticker scheme. During the game, the Android can use a series of colorful emotes by clicking the number keys. New stickers are added on a regular basis, and you can organise your collection by going to the Customization page.
Seasonal Events and Challenges
You will be assigned up to three regular challenges every day. Completing them allows you to advance in seasonal tournaments, in-game currencies, and even special pieces.
Participate in seasonal tournaments to play with other SideArmers and win in-game money or one-of-a-kind, event-themed customizations.
Stats and Character Customization
With a plethora of choices, players may configure their characters, contact options, and profile. In the Customization tab, you can give your character the right look for taunting your victims. A plethora of fascinating stats can be found on the Career page. Stats fans should expect a lot more as the game develops.
Strategies:
—Android movement is extremely smooth. To improve aim, fire just ahead of the goal.
—Use explosive devices to take down the opponents before moving in for the kill.
—In close quarters fighting, use your katana to finish off opponents with poor health.
—Always keep an eye out for those blue update chips. Each chip boosts your maximum health by ten!
—Save the booster fuel for when you need to flee or pursue an opponent with low health.
—Use your rocket boots to jump up vertical walls.
—Attacking with the katana in mid-air would halt the current momentum and force you to redirect.
Holding the Sword (katana attack) key when in mid-air will quickly drop you into a plunge attack that does heavy damage if it hits an opponent.
—Kill streaks grant you extra credits to spend on guns, but they also place a bounty on your head. The greater the streak, the greater the bounty.
—When pink delivery rockets sustain enough damage, they can ignite and emit useful objects. Try aiming one while an opponent is nearby.
—Don't waste credits on secondary weapons if you're trying to save fuel. Watch for delivery rockets to be the first to loot them!
—Rocketing to reach a surface at specific angles will catapult you into the air with incredible energy. Each arena has a unique set of surfaces and angles. Experiment on your rocket boots to discover tactics that can leave your opponents in the dust.
—There are several viewing points in SideArms arenas. When you're out in the open, you can still keep going.
—SideArms' universe has a low gravity. You'll be a sitting target if you're hopping around. Try swapping paths for a rocket boost instead if you want to make yourself more difficult to reach.
SideArms.io is a fast-paced online game that mixes hack-and-slash and shooting. Enter the arena with your loyal robot friend and dominate it!
Related Games