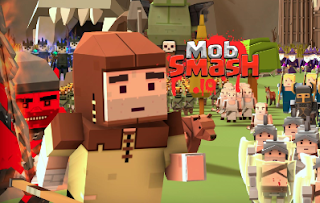 MobSmahs.io is a casual multiplayer io game in which you lead a horde of units in an epic war for survival. You begin with a small band of loyal units and must kill wild animals and collect resources to earn experience points and grow your mob. When you feel confident, threaten other players and attempt to kill their gang!

The graphics are blocky and reminiscent of Minecraft, and the gameplay is extremely enjoyable - you can build a massive mob and conquer the arena, destroying everything in your way! You will unlock new units and boost the strength of your own mob while you win money by beating other mobs. Will you assemble the most powerful mob and conquer the land?


How to play:
—Launch the game and enter your player's name in English.
—From the main menu, choose a crowd.
Controls in-game:
—Movement: Hold down the left mouse button.
—Attack: Release the left mouse button when you're next to an opponent. (Each mob has a unique attack range)
—Stop attacking: Get as far away from the enemy as possible.
—Ultimate Power: Right-click the mouse.
—Collect 100 gold and use it to purchase new mobs from the "Mobs" menu.
Strategy:
—Begin by combating vulnerable animals in a small horde (attack 2-4 animals in one fight),
—When your mob is weak, strive to stop other players.
—Attack stronger animals until the mob has grown to 25-30 units.
for example, wild boars and bears (for maximum XP and score points).
—The larger your mob, the higher your chances against other teams...
—You can gain XP from other players, so destroying large player mobs is really gold and XP satisfying.
TIPs: Consider whether to use your ultimate power, since it will determine the outcome of a war.
Features:
—Multiplayer mobs fighting game in a gorgeous blocky environment
—Hunt various creatures and major bosses
—Increase your number when you defeat enemies Each mob has a unique ultimate skill
—Unlockable new mobs such as wizards and demons
Related Games