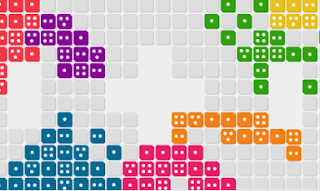 Dupl.io is an io game of strategic land conquest. Duplicate the tiles in order to confuse and trap the other players. Make an attempt to conquer the whole map!

Control: Simply click your blocks (white dots) to stretch them in all four directions. To allow you time to prepare your next strike, growth is limited to once per second. To grab enemy tiles, expand onto them. Capture level 4 tiles to start a chain reaction!
Features:
—A different color to begin with
—The game has a clicker feature, of which you must click to raise the number and compete with others.
—Simple gameplay with a lot of rivalry
Dupl.io is a fascinating and entertaining game. An intriguing idea for an io game. You must expand your territories by rolling dice around the map. Every dice begins with a number 1; as you click on it, the number increases; when your dice reaches four, it splits into four different dices in a larger field. You must repeat this step in order to enlarge the territories and overtake the regions of the other players. Consider the dice placement as well as the numbers available – when you break a dice, all existing dice in its vicinity will have their number changed as well. This game necessitates intense focus, critical reasoning, and rapid reflexes.
Related Games