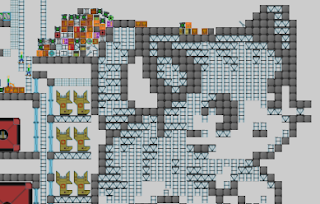 DreDark - Drednot.io is an io game of aerial warfare with 2D graphics. Create a flying battleship with a group of friends and put it to the test. Pilot your ship, man turrets, and build and craft your way to the top of the leaderboard.

The game can be played in a variety of ways: You may build a giant dreadnought with hundreds of weapons and a huge crew, or a small and maneuverable vessel with only your mates. You may opt to battle other ships for their loot or farm bots and mine peacefully. Make sure your turrets are loaded before you first spawn into your ship. WASD and Space are used to travel. Click to select a box of ammunition, then click on your turrets. By pressing Q, you can drop objects. Using your fabricator, create new pieces. You should most likely stock up on ammo and shield boosters. You can also craft ship embiggeners to increase the size of your ship and give yourself more space for fabricators, cargo, and turrets.
Click on the orange helm wheel to pilot the ship. Your vision will be magnified. Zoom in and out by scrolling or pressing C. WASD is used to shift. The orange RC turrets can be aimed and fired from the helm, but the rest of the turrets must be operated manually. You can exit the helm by pressing Space, but when you first start out, you can find some bots (the big red circles) and fire at them for materials. These materials can be loaded into your fabricator, allowing you to produce more pieces. Using the "Team Manager" menu to manage who joins the bus.
Only captains have access to this feature, which allows you to block users you don't want on your deck, copy an invite connection that allows your mates to easily participate, and monitor whether your team is public or invite-only. It is important to control the ship's shields. They can recover passively, so you can patch them easily with shield boosters. When they hit zero, a vital timer of 30 seconds will begin. Your ship will be lost if your shields are not restored within this time frame.
Ships without crew are often sunk after 60 seconds, unless they are in a safe zone and have more than 10,000 points, in which case they are spared. Saved ships will not survive server restarts, but they should allow you to quit the game safely for a few hours. Most items can be made, but more sophisticated weapons can only be accessed from bot drops or mining. Breaker ammunition is used to mine by destroying world bricks. Standard blocks can lose metal, but blocks with a diamond symbol hold rare loot.
It is important to choose the type of ammunition to be used. Standard ammunition has a quicker reload period yet is tedious. Scattershot ammunition has a large spread but does good harm at near range. While sniper ammo moves in a straight line, it can bounce off walls and kill the shooter. If you can shoot well, flak ammunition can deal a lot of damage. Trash ammunition is free to make, which is handy when you're running low on supplies. Punch and Yank ammo are useful for moving other ships and objects about in the overworld. Breaker ammunition is sluggish, but it does strong damage and can be used to mine out bricks. Learn how to customize your ship's configuration by having a dedicated cargo hold for loot or a container for products created by your fabricators. The game is constantly changed (roughly once a week! ), so there is still something new to look forward to. Using the in-game "Support" and "Quick Start" buttons for more up-to-date assistance.
Related Games