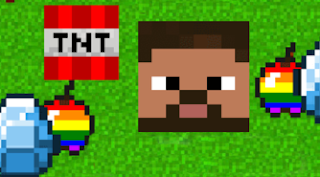 CrazySteve.io is a fantastic multiplayer game focused on Minecraft's classic Steve. Steve is hosting a blasting competition in this game, and each player must compete hard to be crowned king of the competition. Move around the map and gather red bombs to make TNT and blue crystals to grow in size - you can plant 6 bombs at once and drive them in any direction you choose.

Keep an eye out for your own explosives and attempt to kill the other players by catching and killing them with TNT. How high do you think you should get? Will you become an enormous Steve and rule as the blasting tournament's champion?


Control:
- To throw TNT, use the left mouse button.
- To increase tempo, right-click.
Features
- A fun.io game with a growable Steve's head from Minecraft
- 2D pixel graphics
- Exciting gameplay in which you throw TNT to blow up others
- A minimap that shows the position of all players on the map.
- A pace boost option that depletes the experience bar.
You gain a little more with each new stage. If the volume grows, the character's ability to Crazy Steve io catch apples and glasses increases, but you gradually slow down and become more resistant to attacks from swift rivals. The hunting season is easily opened by the top pick, and the players are scurrying across the field searching for a 'fat boy.' As a result, the more points you get, the more intense the fight!
Another advantage of Crazy Steve io is the ability to destabilize your own checker. If you only throw three pieces at once, you can only throw a new one after one of them explodes. There are numerous helmets online, including wooden, iron, gold, diamond, and trolley helmets; wear them or sit in the trolley to be more secure!
Apples and eggs appear on the map all the time; however, they normally compete in the middle, so one can look at the map's edges on a regular basis to collect a big crop of glasses.
Related Games