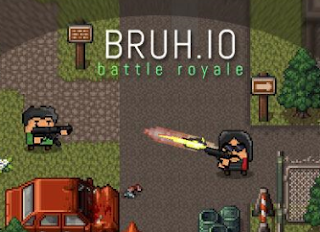 Bruh.io is a fast-paced action game in which you must engage in a tough Battle Royale against other competitive competitors. You have a gun and must try to be the last one standing! You must navigate the cityscape and attempt to survive – keep an eye out for other players who would try to destroy you with their own guns and abilities.

Around the map, you will collect various weapons such as machine guns, grenade launchers, and shotguns. In addition, if you are sick, you can obtain health kits to replenish your HP. A toxic gas will be emitted at regular intervals in the game; you must pass the safe circle in time to prevent being poisoned and killed! Fight it out in Bruh.io today and take control of the neighborhood!


Control:
—WASD or arrow keys to move
—Left click to fire
—E to choose a weapon or object
—R to reload
- Menu in-game : Esc
– T key: Toggle Chat
- Toggle Leaderboard : L key
Features:
—Many spread weapons and objects from which to choose
— A toxic gas field that is continuously rotating and pushing you into a smaller area
— A large map with a variety of systems
— You will use the skins of various characters
— The screen shakes as a result of the hit.
Bruh io is a free-for-all 2D shooter io game in which you compete in rounds. Greetings and welcome to bruh .io (Battle Royale: Unsung Heroes)!
The rules are simple: the last person standing wins. Find arms all around the world and aim to outwit your opponents. If you die, you can still watch the other players until the round is over!
You will save your Win and Kill stats to play on the global leaderboard if you log in or register! The global leaderboard is season-based, with stats reset between seasons to encourage new entrants to threaten the old guard.
Related Games