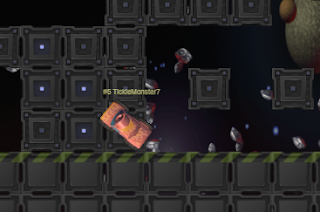 BassDrop is a top-down shooter with a fast-paced action and a banging soundtrack. Drop your opponents into the vacuum with your bass cannon. Accumulate points and milestones. Master the movement and outwit your opponent because you GOTTA GID GUD on the chase for the highest ranking.

Control:
—To fire, use the left mouse button.
—To jump, use the right mouse button.
Features:
—.io tank fighting game
—Vibrant bass drop music with customizable volume
—Bass sounds when attacking and jumping
—3 attempts per game
—The current state of play
BassDrop is a fantastic multiplayer tank game with a sense of humour. The tank you'll be controlling isn't your average tank; it's outfitted with massive speakers that blast the ultimate amount of bass, launching the tank into the air. During combat, use this unusual skill to gain an advantage and escape awkward situations. If you slip into one of the map's voids, you will be lost for all time. The winner is the last tank left, and as the game progresses, the map shrinks in complexity, with more voids being visible. Best wishes!
Related Games