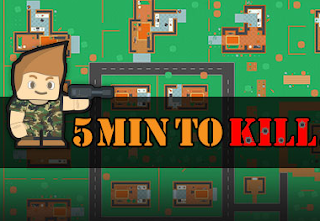 5 Minutes To Kill is an action-packed PvP Battle Royale Shooter io online. Consider PUBG or King Of The Kill reimagined for the.io gaming genre. Bite-sized gaming sessions keep you engaged. Grab a rifle, protect yourself, and live to tell the tale.

Control:
- WASD to pass
- Left click or space bar to fire
- E or right click to pick up
Features:
— Many weapons to be discovered and used
— You can only assault anyone with a pistol
—Armor is a good form of defense
— Buildings with high walls that can obstruct your view
— A player who has been shot leaves a blood trail
Strategy: Early in the game, you can make a crazy dash for weapons, bullets, armor, and a hat. Once you've armed yourself, be aware of the noises around you, as well as the sounds you're making, as they will reveal your location.
5MinToKill.io is a simple io game in which you must move through a large city killing as many enemies as you can. You begin with zero (just your bare fists!) and must walk about the city collecting weapons such as handguns, machine guns, and rocket launchers. Keep an eye out for ammo crates to replenish your guns.
Aside from killing other teams, you must also keep an eye out for the toxic gas that steadily travels into the center of the map – any contact with this green gas will result in your death! Attempt to drive as fast as possible while escaping enemy gunfire and petrol! This game is a lot of fun, and the gameplay and visuals are excellent. Can you hold on for 5 minutes?
Related Games