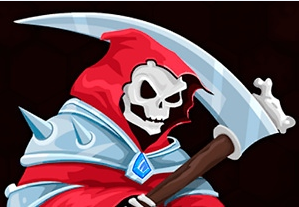 WarCall.io is a fast-paced battle royale game set in a dark fantasy world filled with hostile fighters, wanderers, and daredevils. You'll be damned if you don't shoot first, no matter who you encounter.

Control: Use mouse to play
Tips for using the controls:
- Use the mouse cursor to guide you in the right way.
- Click the left mouse button to attack; hold to prepare a dash attack, then release to perform.
- Use the right mouse button to launch a special airstrike.
Playing tips:
- You can choose from up to ten different champions. Every varrior has its own set of distinctive and upgradeable skills, making it suitable for a variety of playstyles.
- During battles, collect gold and other kinds of gems on the battlefield. Both are needed for bettering your equipment, which will help you become stronger and more skilled in the game.
- Aim for the highest possible level. Your power and endurance increase as you progress through the levels.
- Make the most of your superskills when you're here.
Upgradable skills in the game: Rapid Rat Tough Golem Fierceful Dragon Cheeky Witch are some of the game's upgradeable capabilities.
Related Games