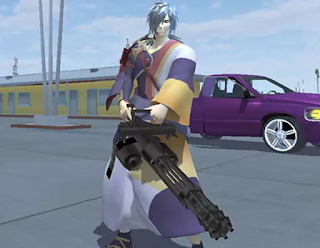 Mad City Rokurou Rangetsu is a third-person 3D action shooter in the style of Grand Theft Auto. Change the camera's distance and flexibility to meet your needs. Play as Rokura Rangetsu, an anime character who causes havoc in the area. Rangetsu Rokurou is a 22-year-old man. Rokurou was once a ninja, but after becoming a ghost, he lost his conscience and common sense. Now he's in a city called Crazy City, where he's wanted to play a little game of fear. Fight the cops, rob a motorcycle, and complete numerous missions. Enjoy a suspect with an unusual personality.

Control:  WASD to move, Mouse to shoot, Space to jump, Shift to run, E key to interact, P key to pause, V key to change camera. 1 - 2 keys: weapons
Features of the Game:
- There are a lot of options in this open environment.
- There are several weapons, cars, and missions to choose from.
- Character from the Tales of Berseria video games.
Related Games