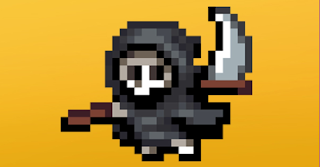 Arx Arcana - Last Mage Standing: Dungeon Royale is a fun battle royale game set in a fantasy world. The top-down gameplay and 2D graphics are also excellent. You must fight hundreds of players from all over the world in this multiplayer game. Choose a character that suits your play style, then unleash hell on your foes by casting spells and using powerful weapons. The action is fast-paced, and the battle royale gameplay complements the fantasy atmosphere perfectly!

Control:
- To switch, use the WASD or arrow keys.
- To fire, use the left mouse button.
- To trigger skills: 1, 2, or 3.
- Shift to run
- Drop skills by right-clicking on them.
In the Controls portion of the Options menu, you can change these and other buttons (gear icon in the top left).
Features Arx Arcana Dungeon Royale:
- Pixelated graphics in 2D
- There are four different characters to choose from, each with its own set of attacks.
- Unlock and use a variety of abilities
- Battle royale gaming is a fast-paced battle.
- Crates that can be destroyed to gain new abilities
- A ranking system that allows you to match your stats to those of other players.
Related Games