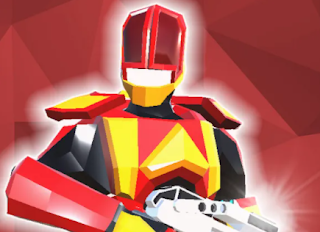 REPULS .io is a first-person multiplayer shooter where you drive and use shotguns, snipers, grenades, and more. to destroy other players.

How to play Repuls io:
- Use W/A/S/D to move and the space bar to jump.
- Look around with the mouse and fire your weapon with the left mouse button. You can also press [Q] to BASH your enemies with a powerful melee attack if they get too close.
- Press [1] to switch between your primary weapon and secondary weapon, and press [2] to use your gear. (frag grenades by default)
- Remember to use the right mouse button to aim when using the rifle.
Mechanical
Movement
Your character in REPULS io game is still running, combined with a high jump height and having your weapon always ready to let you move around the map while knocking down.
Health
Whenever you take damage, simply find a hiding place or dodge the damage long enough and your health will be restored. Naturally, this also means that you may want to attack your target to prevent them from regenerating after successfully damaging them.
Weapons
Every weapon on the battlefield has a purpose. Trying to use the wrong weapon in the wrong situation will guarantee your fall.
Most players also die when running out of ammo in a shootout, so as the mission game's grand appeal is already famous: "Switching to your gun can be faster than reloading" - consider switching à Use the filler by pressing [2] if you run out of ammo in the middle of the battle.
Smaller guns may be weaker, but they're quick to change and can save your life when you get stuck.
Also remember that if your enemy gets too close, you can hit them with your weapon by pressing [Q].
Equipment
Operate your device by pressing [2]. Equipment ranges from explosives like frag grenades to tools like portable jump pads.
Menu
Different maps can have different interactive objects such as portals, explosive objects, and gravitational elevators. Knowing where they are and how to use them can help turn the tide of war.
ADVICE Repuls io online
Fight
You will need more awesome objectives to earn the REPULS IO. Pay attention to your and your opponent's weapons in every battle including your position, a smart player with a gun can take down a stupid player with a rocket launcher if he passes.
Probe
Sometimes knowing the card can be the difference between a skilled warrior and a noob. Some weapons can be dominant if you use them in the correct area on the map. The shotgun might be useless from a distance, but in a narrow hall, it outperformed a sniper rifle. Weapons and powers also appear on the map. Knowing where they are can help you turn the tide.
Related Games