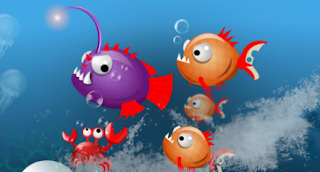 Oceanar .io is a free io game in the battle to become the biggest fish in the sea! In this game you start out as one fisherman and consume food to build up an army of fish that will rule the ocean! The game is simple but extremely addicting because it's great to crush an army of opponents yourself or take down a jellyfish that has already killed you as a new creature!

Game Control: Control your fish with the mouse, the left click is used for attack and the right click is used to merge your little fish into the bigger fish. Remember that once you have a few fish following you, you can control them and control them, not your main fish, leaving you standing still and vulnerable to attack!
How to play: The goal is like some other io games, you start small, lonely and weak in front of both the enemy player and the environment, to improve your chances of survival, your only hope is to eat floating food and gather an army small fish to protect you. As a free game for all games, you should try to avoid larger groups of fish due to the number of battles that are winning in this world, first accumulate a small group of fish. Take your soldiers and try to take down a jellyfish to earn you a treat! Once you start to develop a reasonably sized team, aim to destroy the small groups you are in to increase your score and assert your dominance in the country.
Related Games