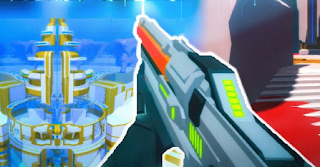 EV.io is the upcoming Halo-esque browser-based first-person shooter.
The game currently supports two play modes. In a deathmatch, freely compete against other players to get the highest number of kills. In a team match, work with your team to achieve the highest number of collective wins.

The weapon system in EV .io is a bit different from other browser shooters, like Krunker or Venge, in that you can't pick up a weapon from a map. In ev.io, you choose which primary weapon you start with: a cannon, automatic rifle, or laser rifle. Each of the main weapons is different from a different prototype. For example, automatic rifles deal low damage but have a fast rate of fire. Laser rifles have high damage but a slow rate of fire.
Besides choosing the primary weapon, you can also pick up weapons from the map. There are three types of weapon to choose from: pistols, snipers, and rocket launchers. Pickup weapons are slightly more powerful than your primary weapon, but have a limited amount of ammo. So you have to count the number of shots to get the most out of it.
The game also has a fairly complex skill system, mostly focused on movement and grenades.
Grenades: You can choose from 2 of 3 types of grenades: Smoke Grenade, Standard Grenade, and Flash Grenade.
Movement: spend 3 points in 3: teleport, jump and sprint. For example, you could score 1 point for sprinting and 2 points for teleporting. If you skip all 3 dances, you can do 3 jumps.
Jumping doesn't use stamina but other things like teleporting and sprinting do. The mechanism of movement in ev.io is very diverse.
Compete in leaderboards or visit in-game stores to unlock more skins and cosmetics (coming soon). You can also play private games with your friends by tapping the game sharing link in the menu (press M to access it).
Related Games