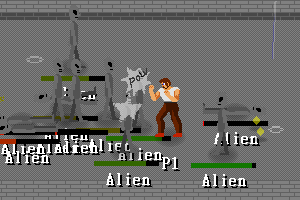 Royal City Clashers 3 is the next epic entry in the Royal City Clashers series, which is bloodthirsty and nostalgic. Trouble never stops in Royal City, a city full of violence, disobedience, and disorder and it is your mission to try to get the order on the streets and destroy numerous foes, thuggish people, and outsiders! Use your character with the WASD keys and the Space bar or B button for attacks.

Do not forget to raise weapons and shatter any item to discover whether hidden power-ups or new weapons are waiting. Try not to get struck by your adversaries, but to keep your foes dazed when their punches, kicks, and weapon strikes. You may always play with your pal a 2 player version utilizing dual controllers if you want some more fun! Get back into Royal City's deadly environment and establish your name as a vicious streetfighter!