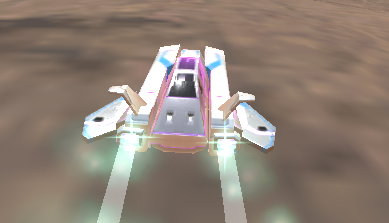 Get ready for a Cyber Racer Battles experience in which you will have moments filled with fights and races in space! Get ready to enjoy yourself with its stunning racing maps and career fashion missions. One player or two player is allowed to play the game.

Control:
- Player 1: WADS keys to move; F key to missle; G key: Machine gun or Laser gun; F key to fix hover position
- Player 2: Arrow keys to move; O key to missle; P key: Machine gun or Laser gun; L key to fix hover position
Three game modes are included in the game. These modes are running, running and free roaming. You can play both Race and Free Roam modes in single or two player game mode between these modes. You collect coins from races if you can win and buy new coins in single player mode. Whenever you're in the race mode, You can find six maps in Race mode. Each map would have a gradual incentive. There are twelve combat maps in Mission game mode, each one vibrant and robust.
New guns such as a machine pistol, laser gun or homing missile can be purchased from the "SHOP" menu for any Hover which you have purchased. In particular, you obviously would require a rifle and you can purchase a machine gun at the beginning of the game if you want to play goal game mode. You will need weapons for meteoric missions and floating battles in Free mode. The pace, acceleration, handling, and shield of each hover on the game garage is different. You would require new hovers by moving into goal mode and race mode. Recall checking for fresh garage flovers.
Related Games