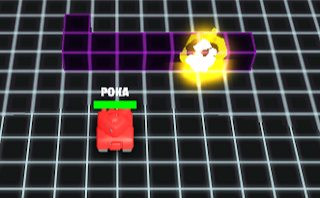 Tanks io online is an action-packed io game in which the aim is to kill 25 people before the other team. Fight in the arena with your team against other teams from all over the world! To win, the team must be the first to commit 25 kills! Cover your teammates and collect power-ups that show on the map. However, do not give your life in vain! Keep in mind that your frag is a step closer to victory for both you and your enemies!

Control:
- Arrow keys - movement
- Use the mouse to point and fire.
- You should change your nick name in the settings!
- To play offline with bots, go to Settings -> Network: Offline.
Strategy:
The secret to victories in Tanks Online is teamwork and dominating the arena with power-ups (Health, BulletPower, BulletBounce, Shield)! Stay united, aim your fire to finish off the defeated opponents, but most importantly, maintain your team's advantage in the long run and attempt and push back the team ahead of you!
Related Games