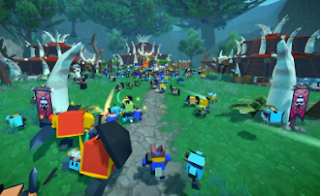 Hordes.io is a team-based io game in which you battle zombies with everything from spells to cannons. It's one of the most unusual games we've featured; what sets it apart is its 3D aspect and game play; you walk through this 3D world, attempting to defeat monsters either alone or in collaboration with other players on the map.

Control: The WASD keys are used to control your character, and the mouse is used to switch the camera and pick enemies/allies to attack/assist. Finally, your abilities are located on keys 1,2,3,4, but once in game, anything can be rebound to various kills!
How to play: In true MMO fashion, you are given the option of selecting one of four starting classes: warrior (tank), ranger (ranged damage), mage (ranged damage), and healer (support). You begin in a safe area of the map surrounded by high level npc guards and other players. As an adventurer, your role is to rid the world of the evil npcs that spawn in the local area while also gaining experience to unlock new abilities and becoming stronger. If you gain power, you'll see that lower leveled enemies die quickly; but, as you travel north, you'll encounter bigger and badder enemies who will be more difficult to defeat. To defeat the never-ending horde of enemies and win money, you must battle with other players.
Hordes.io immerses you in a 3D environment filled with block monsters and other matches. Begin fighting them to raise your level and strength. It should be noted that Firefox can have issues with the mouse pointer lock; the game works better in Chrome. If there is some latency, setting the gfx quality to 0 will improve.
Related Games