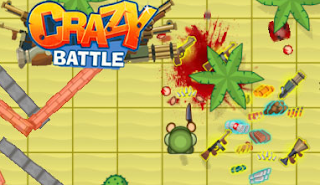 CrazyBattle.io is a fantastic multiplayer battle game. You are dropped into the fight by parachute and are only armed with a knife. You must explore the map in search of more equipment and guns.

You should also collect items such as timber to help defend yourself. These materials will then be used to build walls and structures! The graphics are cool, and the gameplay is entertaining. Will you be the last one left to make it through the mad night?


Control:
—Left mouse button to fire
—WASD to move
—Z, X, or C to choose wall style
—Right mouse button to place walls
—1-5 keys to swap items/weapons
—E key to perform activities
—Shift to run
—Enter to chat
—Hold space bar to drop from the parachute
Features:
—Top-down camera view
—Collect resources and build walls
—Various weapons
—Smooth graphics and gameplay experience
—Fresh skins that can be unlocked
**Ammunition: a knife, a revolver, a shotgun, a double-barrel, a tommy gun, a machine gun, a grenade launcher, a rocket launcher, a cannon, a sniper rifle and a laser, a bandage, a armor.
During a fight in CrazyBattle io, players may earn the following achievements: butcher, executioner, exterminator, hunter, murderer, ninja, veteran, fighter, sniper, and legendary. As well as skins for unlocked achievements.
CrazyBattle .io is an io title with several game modes:
1. The death match mode is a bloodbath! Players descend by parachute and battle indefinitely. After you are defeated, you will re-enter the fight by parachuting and attempting to finish first. Only true masters will reach the top 1, and the game uses the following formula to decide the skill level: * Kills / Death + Victim ability * Magical damage
2. The zombie mode. Players would not be able to destroy you when you have a more serious dilemma - zombies! You're safe before the sun goes down, but when the sun goes down, zombies strike. If you don't have time to find an understanding with other players and develop a solid defense, you could not make it through the night. Every night, the number of zombies grows. Try to live as long as possible!
CrazyBattleio is a 2D arena game. On an island full of explosive barrels, battles take place. It is best to avoid them; otherwise, you will be blown up. If a smart player sees you close the barrel, he will fire it. You will save yourself by erecting barriers. You'll need wood for a wooden wall, bricks for a stone wall, and iron for an iron wall. Wood may be made from trees and wooden artifacts, bricks from brick buildings, walls, and stones, and iron from vehicles and appropriate waste.
Related Games