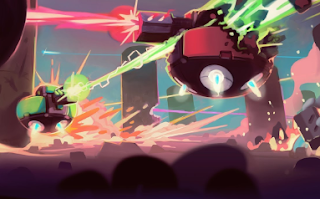 BotBattles.io is an entertaining robot game in which you must race against other players to be crowned king of the arena. You control a single bot and can bestow specific abilities on it – select from over 20 different abilities to make your bot powerful in battle.

Try different combinations of abilities to make a bot that can compete in the arena. The graphics are basic, but the multiplayer gameplay is a lot of fun. Can you take down the BotBattles arena? What kind of bot are you going to build?


Control: To switch your bot, use the WASD or arrow keys. Shoot with the mouse. Map your skills to three keys of your choice.
Features:
—More than 25 distinct abilities to employ \
—Simple 2D graphics
—Easy controls
—Statistics from the leaderboard and the past
Scores
Log in to keep track of your stats and to improve your ranking. The ELO rating system is used to rate players. Defeat players who are ranked higher than you to boost your ranking.
Strategy
Your plan should rely on the abilities you chose. Any skills, such as the force field, are excellent for protection. Others, such as projectiles, are offensive. Others, such as teleport, increase your mobility. Combine powers to build combos such as EMP to disable the opponent's shield, health blasters to reduce their health, and teleport to get near to or flee them. Experiment with various variations to see what fits best.
Related Games