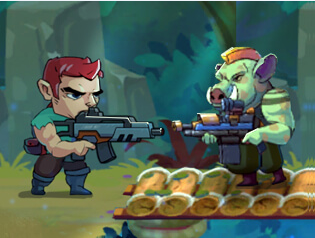 Jungle Hero 2 is a 2D action-adventure game with several missions in which the player battles aliens.

The Earth has been overrun by evil aliens who have taken refuge in the jungle. You'll take on the part of a special soldier tasked with infiltrating an alien base infested with monsters and killing their three bosses. The world is eagerly awaiting your liberation!