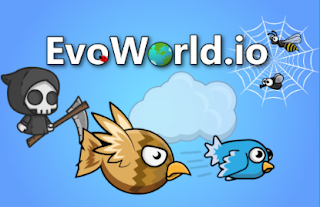 EvoWorld.io was formerly known as FlyOrDie.io, and it is a multiplayer survival game. You begin as a small fly and progress through the levels as you consume more food. Other players become a part of your diet as you progress. Each stage adds a new special skill as well as more food to consume. It's an easy choice: you either fly or die!

Control:
- To switch about, use WASD.
- To fly, use the left mouse button.
Tips:
- Don't spend so much time in one location.
- Make the most of your extraordinary talents.
- To stop getting eaten, hide in the clouds.
- Make sure you have enough of water.
- Consume as much prey as possible!
Features:
- Explore 45 different animal species.
- Fly into space or explore the depths of the earth.
- In the.io multiplayer game, you can play in a number of biomes.
How to Play:
Eat the green-outlined foods and poultry. Animals with a red outline should be avoided or they can kill you! You'll be competing for survival against hundreds of other teams, so stay active and feed regularly. Keep an eye on your water supply as well; you'll need enough to live.
Special Abilities
Each animal will have its own special talent as you progress through the game. You should make use of the unique skill to speed up the game. You'll have "beginner's luck" when you first start out as a fly. This offers you a 50% chance of avoiding an attack by a predator. Make the most of your extraordinary talents.
Game Levels
There are 45 individual species and 8 stages of adaptation in EvoWorld. As a basic fly, you must fight your way through the animal world. There are ghosts, mythical beasts, cosmic beings, and the undead after you've finished with the usual creatures. The grim reaper is at the tip of the food chain, and he hunts prey with a scythe.
Biomes
EvoWorld.io has a variety of biomes. Each one has its own distinct landscape. Each place will have different prey, so don't be afraid to explore the map and see what's out there.
Related Games