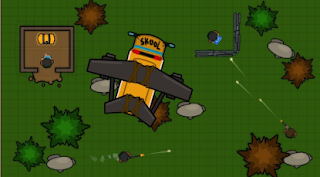 Battle Royale is the name of the game in Build Royale (.io), a multiplayer.io game. In a massive gunfight, you'll be pitted against a lobby of other teams. The only goal is to be the last one standing at the end of the game. You'll start with only a pickaxe, which you can use to mine materials with. These would then be used to build defensive walls. To win in Build Royale, you must think quickly and keep going because a storm is closing in on the play field, which is shrinking in scale. To be able to defend yourself, you must also check out stronger weaponry.

Control:
- Use the WASD keys to move.
- Fire with the left mouse button
- Target or adjust materials with the right mouse button
- Tab to open the inventory
- M to open the map
- Space bar to hop
- Shift to run
- Q to enter construction mode
- R to reload
Features:
- A multiplayer battle royale game with a gameplay mechanic that allows you to create.
- A large map to play on with nice 2D graphics and a top-down perspective
- You should take refuge within a structure.
- Various arms strewn across the map
Related Games