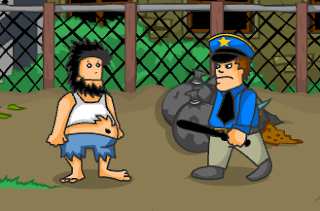 Hobo is the first installment in the entertaining series of combat games. You take care of a street urchin and have to fight on the road! When you're targeted or abused by others, use your super strength to punch and forget! Your hobo has some war moves, so beat your adversaries with them all.

New moving combs are available as you go; by pressing the P-button, you can show your combos. Check the board for items like flasks and baskets to throw at the adversaries. Are you going to end the game and open all the combos? Why not use that with a reward at each stage of difficulty?


Control: Punch with A key, pick up objects with A key, knock with S key, choose with the arrow keys, and sprint by double-tapping the left/right arrow keys.
Features:
—Many different types of combos to unlock
—Different people to beat in the city
—Three difficulty levels
Related Games