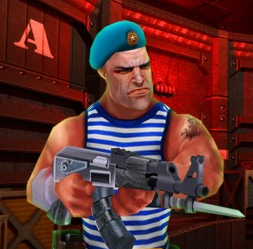 Rocket Clash 3D is a fantastic third-person shooter with stunning visuals and entertaining gameplay. In this game, you command a group of resistance troops attempting to retake possession of an underground missile base.

Your weapons are a tactical AKS and a lethal concealed rocket launcher. Keep an eye out for the toxic liquid that can be contained in the chart – it can damage you. In a fierce fight, stay vigilant and strive to destroy the opponent.


Control: Move with the WASD buttons, crouch with the C key, leap with the Spacebar, and aim and fire with the mouse. When you switch your finger on a touch screen, your gun will auto-shoot when you point it at a player.
Features:
- A fast-paced and entertaining third-person shooter title.
- Hazardous liquid
- Character who can be upgraded
- A new rocket that can be found in the arena Jump feature is now available on the smartphone edition.
Related Games